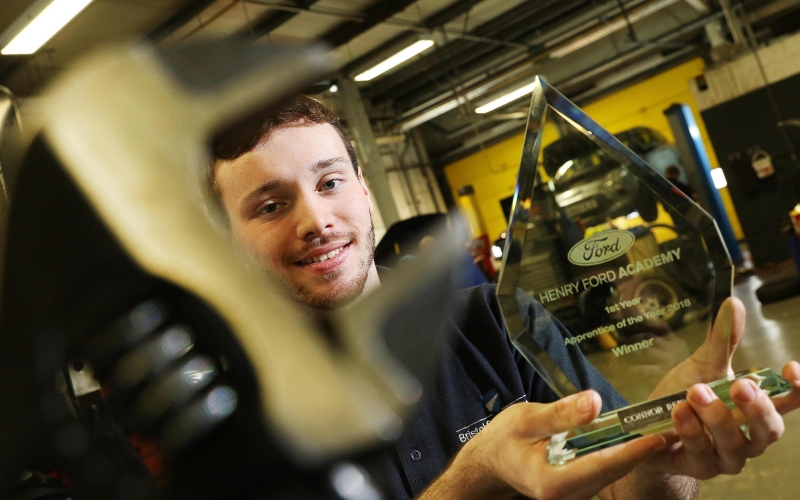 An apprentice at Bristol Street Motors in Cheltenham has been named as Ford’s Apprentice of the Year.

Connor Reid, 18, was named as Ford Apprentice of the Year in the ‘1st Year Light Vehicle Category’ out of more than 1000 apprentices in Ford’s portfolio of dealerships across the UK. Connor, who started his apprenticeship in July last year, works at the dealership for three weeks each month and spends the remaining week studying at Bridgwater and Taunton College. His course tutor, Tom Langdon, nominated him for the award.

The aim of the Ford Apprentice of the Year Awards is to celebrate the success and achievements of apprentices from a range of disciplines, at all levels. The awards also acknowledge the dealers which employ the apprentices, in addition to the support and training provided to them to enable them to qualify and thrive in their chosen fields.

I love being an apprentice, it allows me to try something different every day

Connor said: “I feel very proud to have been acknowledged by Ford as an Apprentice of The Year, especially as there were so many young people being considered for the award. I came first out of more than one thousand 1st year apprentices across the UK.”

“I love being an apprentice, it allows me to try something different every day and I’m always learning new skills. I am now looking forward to finishing my apprenticeship and to work as a full-time technician.”

Tom said: “Connor is an outstanding student who has an excellent drive to complete all work set to the highest standard and he has had excellent online assessment scores which have always remained between 80-100%.

“I think that Connor will make an excellent technician in the future, if he continues at his current rate of success. He has brilliant communication skills, he is always keen to help and I believe that he’s a perfect example of a modern technician apprentice.”

Rob Lewis, general manager at Bristol Street Motors Cheltenham Ford, said: “Connor is a brilliant role model for anyone and testament to the success of apprenticeships.

“He works extremely hard and is always eager to gain new skills and learn as much as he can. Connor has represented Bristol Street Motors in a fantastic way and we are very proud to have him on the team.”