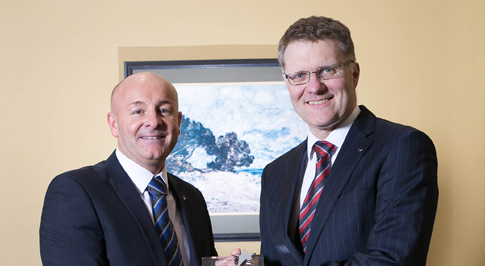 John Bowman, an Aftersales consultant for Vertu Motors Plc, was named ‘Central Support Centre Person of the Year’ at the Group’s annual management awards held at the Eslington Villa hotel in Gateshead.

As an ambassador for the business, John spends his life on the road meeting colleagues at Vertu’s ever-growing network of dealerships.

He travels the length and breadth of the country visiting recently acquired dealerships, introducing them to Vertu’s values, policies and IT systems. His unrivalled ability to engage and build relationships with his new colleagues is almost as legendary as his cooking and encyclopaedic knowledge of computer systems.

Robert Forrester, chief executive of Vertu Motors Plc said: “One of our core values as a business is to recognise and celebrate excellent performance and our annual management awards are a chance to do just that.

“Every year that we hold the awards it becomes harder and harder to decide on a winner, everyone who is nominated has performed exceptionally well over the year and is at the very top of their game.
“It gives me a great sense of pride to know we have so many amazing individuals on board and fills me with great confidence as we continue to build the business in 2016.

“John is very passionate about his role and is a fantastic ambassador of our values. He has talent, drive, energy, attitude and character in abundance.  John personifies customer service; he always goes the extra mile to help anyone, and when called upon is always more than willing to help. John is one of the people who makes the Group tick and deserves this recognition.”

Collecting his award, John said: “I’m so pleased to have been named ‘Central Support Centre Person of the Year’, especially when you consider the fact that I tend not to be in the same place too long. I thoroughly enjoy my job and meeting so many amazing colleagues is a reward in itself, but to hear that I have left a lasting impression on them makes all those hours on the road worth it.”