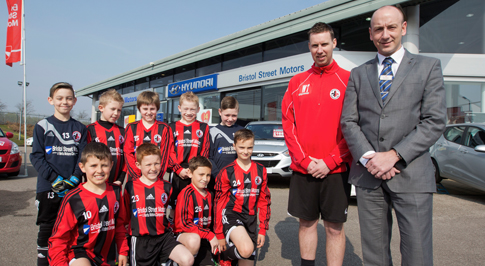 Bristol Street Motors Hyundai and Suzuki in Mansfield are supporting the football stars of tomorrow by kitting out local under 10’s club, Manor Bayern, with football strips.

The club received a generous donation from the dealerships, which are both based on Southwell Road, enabling it to purchase new shirts, which display the Bristol Street Motors’ logo, shorts and socks for the players.

Manor Bayern plays in the KicKStart Sunday League and following a successful season, which saw them win the title of KicKStart Division 2 champions.

Derrol Witts, General Manager of Bristol Street Motors Mansfield Hyundai and Suzuki, said: “We are delighted to be backing the players as it will help young people in the area develop their skills in a productive way.

“Sport brings people together and is a very important part of the community, so Bristol Street Motors appreciates the significance of supporting local organisations and recognises its role in giving something back to the area. We look forward to hearing about Manor Bayern’s future successes and will go along to a match to watch the youngsters’ football skills in action!”

Wayne Taylor, Coach at Manor Bayern, said: “We are really pleased to be associated with a company such as Bristol Street Motors. Nurturing the up and coming talent of the youth team is hugely important to us and we encourage the children to not only enjoy playing the sport, but to make new friends, so the sponsorship will make a very positive contribution.

“We are extremely grateful to the dealerships for the support and everyone at Manor Bayern would like to say thank you to Bristol Street Motors Mansfield.”