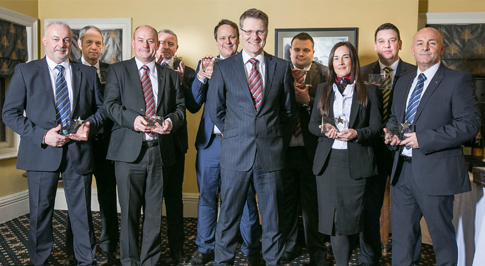 The CEO Awards is an important opportunity for Vertu Motors’ CEO, Robert Forrester, to highlight the success of managers from across the Group, which includes Bristol Street Motors, Macklin Motors, Farnell Land Rover, Vertu Volkswagen and Vertu Honda.

Each entrant is nominated by colleagues working within the Group. Although most nominations come from the managers’ divisional teams, this year a number of the award winners were nominated by team members from other divisions, demonstrating the impact that these individuals have across the Group in implementing Vertu’s ‘working together’ ethos.

Robert Forrester, chief executive of Vertu Motors PLC said: “One of our core values as a business is to recognise and celebrate excellent performance and our annual management awards are a chance to do just that.

“The award ceremony is a celebration of the success, passion and commitment that our managers put in and it’s a pleasure to be part of that.