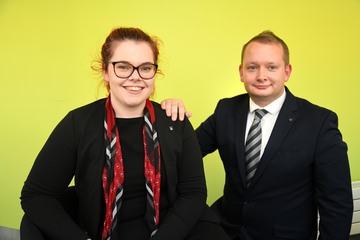 Katie Cuthbertson is training as a finance MI analyst at Vertu House in Team Valley, while working towards a BA in Business Leadership & Management degree, in partnership with Northumbria University.

Katie has worked with Vertu Motors for three years, initially joining the Group as an apprentice. She works within the finance department in head office, and reports on the numbers submitted by each site. In her spare time, Katie enjoys theatre, including singing and dancing, and works part-time as a production assistant and makeup artist for a local cabaret company.

The degree-level apprenticeship offers talented young people the chance to gain a degree while earning a good salary and holding a full-time permanent role within the business. Vertu Motors plc, the Group which owns Bristol Street Motors, will fund £27,000-worth of tuition fees over the three-and-a-half-year course is one of the first motor retail industry’s degree-level apprenticeships.

This year, a group of 13 people are starting the apprenticeships, an increase from last years’ 10 students, who are now commencing their second year. Like Katie, students will spend the majority of the course in placements at dealerships across the Vertu Motors group, with the prospect of quickly progressing into managerial roles.

Katie said: “I have worked for Vertu Motors for three years, after initially starting as an apprentice. I saw the degree-level apprenticeship as a way to further my skills, progress my career and work towards a degree, while still earning a decent salary. I am really enjoying the programme so far; no two days are the same and I look forward to what each day will bring.”

Robert Forrester, chief executive of Vertu Motors plc, said: “The degree-level apprenticeship is a fantastic opportunity to gain a respected degree, debt-free in a dynamic industry. The programme was hugely successful last year and we are thrilled to welcome our new intake.

“We are always keen to take on talented, enthusiastic people who will fit with our values and our degree-level apprenticeship is not just something for school-leavers to consider. This year we have welcomed a strong mix of men and women of different ages, from a variety of backgrounds. I am excited to see how their careers progress over the next couple of years.”