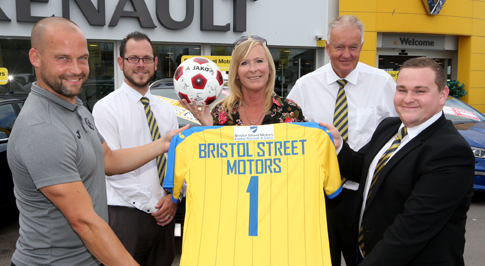 As part of the support deal the away stand at the team’s Plainmoor home ground has been renamed the Bristol Street Motors Away Stand, and the dealership is featured on the team’s home and away kit.

“Torquay United has a loyal and committed fan base and I know they’ll be backing them to the hilt in the race for promotion. It would be fantastic if they can do it this year and we’ll be supporting them all the way.”

Sharon Cox, commercial manager at Torquay United, said: “It’s great to have the backing of Bristol Street Motors Renault Exeter. It’s crucial that along with our dedicated fans, we also have support from local businesses and organisations.”