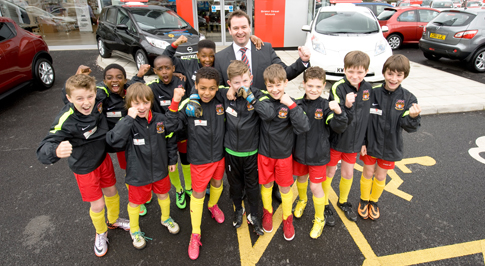 Aspiring football stars have been given a huge boost in their training and development, thanks to Bristol Street Motors Nissan in Northampton.

The dealership has agreed a two year sponsorship deal with Northampton Under 10s FFA Escola, enabling the club to purchase tracksuits, which display the Bristol Street Motors’ logo, for all the players.

Leanne Martin, who is a service receptionist at the dealership based on Carousel Way, has a son who plays for the team and thought it would be extremely beneficial for the club to receive support from the well-known dealership.

FFA Escola prides itself with maximising potential and is highly regarded by the FA. Its U10s team plays in the local premiership league for children, which is also the top league in the area.

Mark Dale, General Manager of Bristol Street Motors Nissan in Northampton, said: “We are delighted to be backing the players as it will help young people in the area develop their skills in a productive way.

“Sport brings people together and is a very important part of the community, so Bristol Street Motors appreciates the significance of supporting local organisations and recognises its role in giving something back to the area.

“Northampton Under 10s FFA Escola is doing extremely well and we are pleased to be supporting the team to help it achieve future success.”

Jacob Gartland, Coach at Northampton Under 10s FFA Escola, said: “We are really pleased to be associated with a company such as Bristol Street Motors. Nurturing the up and coming talent of the youth team is hugely important to us and being part of the club makes such a positive contribution to the children’s lives.”