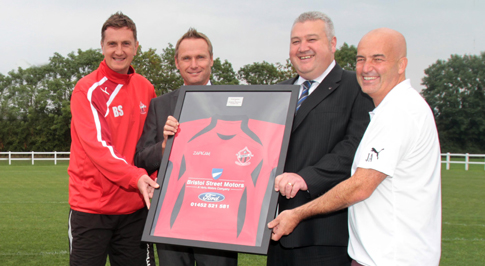 A football team has celebrated its first victory of the season after putting on their new strips sponsored by Bristol Street Motors Ford in Gloucester and Cheltenham.

Originally formed in 1995 by Dave Mulrain and Ron Capper, Quedgeley Wanderers Football club has grown from being one team of under 14s to 23 competitive teams of all ages and genders.

With over 400 members, the club has received a number of accolades including the FA Charter Standard Development Club Award as recognition for exceeding standards set by the Football Association.

The significant sponsorship from Bristol Street Motors Ford in Gloucester and Cheltenham has helped to purchase new strips for the first team, who play in the Northern Senior League, as well as sponsorship banners that will be displayed around the pitch.

Development Officer, Joe Alps said: "We are over the moon with the new sponsorship. Bristol Street Motors Ford Gloucester is a well-known and successful business and we are proud to be associated with them. Since the sponsorship has become official the lads have won their first game of the season in their new kit, we are definitely taking this a positive omen and are looking forward to continuing our relationship in the future."

Chris Rich, General Manager of Bristol Street Motors Ford in Gloucester and Cheltenham said: "We are thrilled to be supporting Quedgeley Wanderers Football Club and all the positive work they do through sport. Similar to ourselves, the club started small but worked hard to achieve the success they have at the moment. Here at Ford Gloucester, we wanted to show recognition for the hard work and dedication to sports and the community."