From Graduate to Management 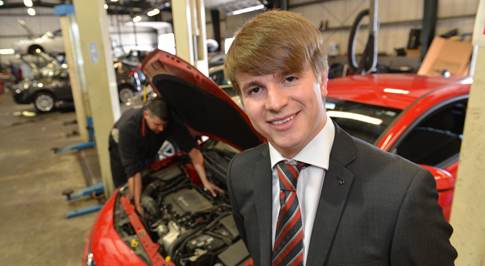 From Graduate to Management

Car retail company Vertu Motors has shown its commitment to helping graduates into management positions as its first graduate trainee has passed his training period with flying colours and progressed to a senior role at Bristol Street Motors Lichfield.

The news comes as the latest figures show that the proportion of recent graduates working in a non-graduate job had risen to 47%, a sharp rise from 39%, the same figure before the financial downturn struck the UK.

Andrew, a graduate of Liverpool John Moores University, has undergone a rigorous three-year training programme with Vertu and the company is putting him through a Masters’ Degree in Strategic Automotive Dealership Management at Loughborough University, which he is studying for whilst working full time at the dealership.

During his training, Andrew, from Ormskirk, Lancashire, has undergone an extremely comprehensive programme, including working across all departments at five different dealerships and spending three months at Vertu’s Head Office in Gateshead, Tyneside.

Andrew said: “It’s been a massive amount of hard work and a very steep learning curve, but a hugely rewarding experience. Vertu’s graduate programme is extremely comprehensive, well-structured and designed to test and challenge graduates. I’ve always had an interest in cars so as soon as I saw the graduate scheme advertised, I knew it was the right role for me.

“I love working for Vertu Motors – it’s a company which invests a lot in its people and makes you want to work hard. I’ve got a lot of ambition and I’d like to go as far as possible with the company –  the sky really is the limit.

“I would encourage any graduates who are prepared to put in the effort and go the extra mile for the company to apply for a position on this scheme – they will get a lot out of it and they certainly won’t regret it.”

Matthew Barr, Human Resources Director at Vertu Motors, said: “Andrew is the perfect example of the type of person we are looking for in a management trainee. He has the qualities we like to see in all of our colleagues – a proactive attitude, drive, ambition, energy, enthusiasm and most of all, talent. He has proved himself across all different departments and been a great new addition to the team. I’d like to wish Andrew all the very best in his new role and I’m sure we will see Andrew progress through the ranks in years to come.”