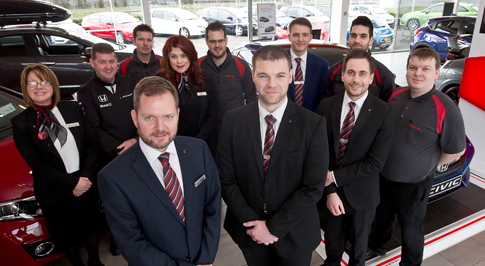 The Sovereign Way dealership has welcomed new general manager Mark Dickinson and service manager Steve Penn, who both have extensive experience within the motor retail industry.

Mark has held key managerial roles at a number of franchise and independent dealerships over a career spanning more than 20 years. Having spent the previous five years specialising in Honda vehicles, Mark is looking forward to his new role, saying: “I’m very pleased to be starting my new position at Vertu Honda Mansfield. It is a dealership with an excellent reputation locally, which comes down to the performance of my new colleagues, many of whom are long standing members of the team. I’m looking forward to working with them to build upon this to expand our customer base.

“I’m also looking to build on the dealership’s involvement with the community. It is a local dealership, employing local people, so I feel it’s vital that we build upon the many local customer relationships that we already have and welcome new customers to the business.”

New service manager Steve Penn joins the dealership from Bristol Street Motors Peugeot Worksop, which is part of Vertu Motors plc, where he headed up its service department for more than five years of his 16 year-long career in the motor industry. He said: “I’ve been with Vertu Motors for many years, having worked for the business at its Peugeot Worksop dealership where I helped develop the service department and its team, which was something I thoroughly enjoyed.

“When an opportunity came up to take on a new challenge at Vertu Honda Mansfield, within the Vertu Motors group, I jumped at it. My aim over the coming years is to help my new colleagues to develop, gain new skills and build upon their existing capabilities to make sure that customers receive the very best possible experience.”