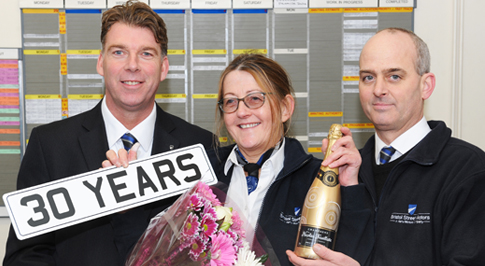 The team at Bristol Street Motors Ford in Bolton has joined together to celebrate a colleague’s 30th year of working in the bodyshop.

Bev Gresty has worked at the bodyshop since 1986 when her family owned and ran it as a family-business known as F Gresty & Son. Since then it has changed hands a couple of times, but she still sits under the sign that bears her family name at the Higher Bridge Street Dealership.

A few years after Bev joined F Gresty & Son, her brother, who was running the business, sold the bodyshop to another old Boltonian business, Gordons Ford, which moved the bodyshop to its current site and changed its name to Gresty's The Accident Centre.

When Gordons Ford was acquired by Vertu Motors plc, the parent company of Bristol Street Motors, in 2014, Gresty’s The Accident Centre was amalgamated into Vertu’s existing network of bodyshops.

Bev said: “I’d like to thank my colleagues at Bristol Street Motors for my gifts. 30 years is a long time in any industry, but I’ve thoroughly enjoyed my job ever since my first day in 1986.

“It was a lot different back then. There were no computers to order in parts or attract a customer base. Everything was done by word of mouth, you would have to call through to different suppliers, sometimes calling several different companies just for the one repair job.

“Gresty’s built up its reputation for excellent work at a reasonable price through reputation and the association is so strong people still call the bodyshop Gresty’s locally. I’m really pleased that both Gordons Ford and Bristol Street Motors maintained the quality.

“Everyday I sit under the Gresty’s sign in reception and think back fondly of all the years I’ve worked and all the colleagues that have come and gone.”

Darren Murray, General Manager at Bristol Street Motors Ford Bolton, said: “We’re pleased that Bev has stuck around. Her links with customers goes back decades, which is invaluable to us.

“She is also a joy to work with. Her positivity and her happy disposition are infectious. You can’t leave the body shop reception without a smile on your face.”