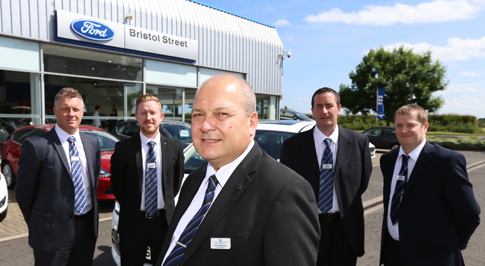 Dave has worked in the motor trade for 36 years, joining Bristol Street Motors 12 months ago as general sales manager before being promoted to manage the Morpeth dealership, which employs 28 people.

Jamie, Phil, Terry and Dean have all worked their way up the career ladder since joining Bristol Street Motors to bring a variety of skills and experience to their current roles.

The dealership has gone from strength to strength since being acquired by Bristol Street Motors in 2007.

David Anderson said:  “This is a really exciting opportunity for me, there is a very strong team here at Bristol Street Motors Ford Morpeth with some very talented colleagues and I am certain that the next seven years will be even more successful than the last seven.

“The dealership is thriving in the town with sales growing and the ethos of excellent customer service has built us a strong and positive reputation.”