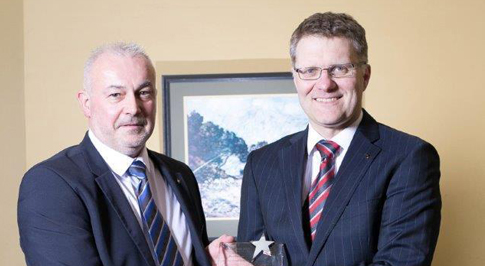 Paul has secured the accolade after delivering the strongest financial, customer and colleague satisfaction results yet for the Bristol Road bodyshop throughout 2015.

Robert Forrester, chief executive of Vertu Motors Plc said: “Paul has won Bodyshop Manager of the Year due to his sterling performance.

“He has developed a great team which delivers excellent results time and time again. He is a fantastic manager who leads by example to instil confidence in his team and it is clear that his team trust and value his expertise.

“Paul’s colleague satisfaction scores in 2016 were incredible and reflected a sea change in the short period of time since his appointment.

“One of our core values as a business is to recognise and celebrate excellent performance and our annual management awards are a chance to do just that. We would like to thank Paul for his hard work and commitment.

“Every year that we hold the awards it becomes harder and harder to decide on a winner, everyone nominated has performed exceptionally well over the year and is at the very top of their game.

Paul said: “It’s a great honour to be named Bodyshop Manager of the year. This award is testament to the importance of finding, recruiting and retaining a great people, then working with them to create the best possible team.

“Everyone at Bristol Street Motors Gloucester Ford is on the same page when it comes to the most important aspect of the business; delivering the best possible service to our customers.

“Having worked for Bristol Street Motors for a number of years, I know that it is a company which recognises the hard work and success of its colleagues, and although this award has my name on it, it belongs to all of the team as our excellent performance is a joint effort.”