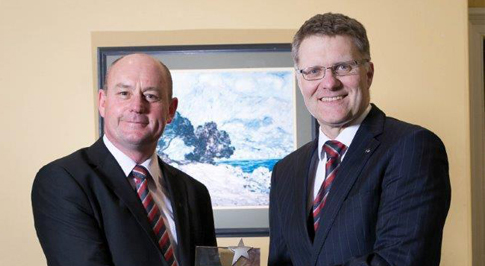 Steve began managing the parts department at the Grimbald Craig Road site after the dealership was acquired by Bristol Street Motors in late 2012. Since taking over Steve has worked hard to improve both retail and trade aspects of the business and through his own sales and marketing initiatives has achieved great success at the site.

Steve’s success has also been recognised by Vauxhall; his year-on-year increase in sales has secured him a place in the final of the nationwide Vauxhall Trade Cup, after winning rounds one and three of the regional competition.

Robert Forrester, chief executive of Vertu Motors Plc said: “When Steve took over at Knaresborough Vauxhall he was tasked with getting the dealership’s parts department back on track and has tackled this challenge head-on. His get-up-and-go attitude has been a key part of that transformation. He has developed his own initiatives to drive sales and forged important relationships with key clients and suppliers, for example his fantastic ‘Black Friday’ campaign.

“One of our core values as a business is to recognise and celebrate excellent performance and our annual management awards are a chance to do just that. We would like to thank Steve for his hard work and commitment, and wish him best of luck in the final round of the Vauxhall Trade Cup.

Steve said: “I’m very pleased to have been named Parts Manager of the Year. The last few years since joining Knaresborough have been challenging, but have certainly been a career highlight for me as I thoroughly enjoy the challenges of my job.

“It has been hard work turning around the parts department at Knaresborough. It is the perseverance and commitment to customer service from everyone at the dealership that has brought us this success.

“Having that perseverance recognised by Bristol Street Motors and Vauxhall UK is an amazing feeling, however I won’t rest on my laurels and I now intend to build on the success to drive further sales at the dealership.”