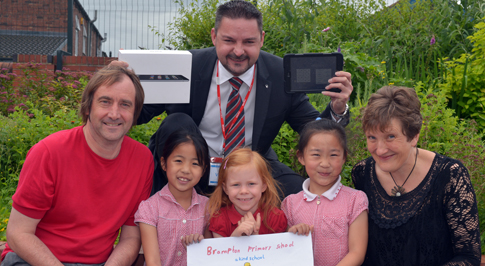 Older pupils at Brampton Primary School took part in their own geographically-focussed version of the popular TV quiz show, Pointless, with Bristol Street Motors Vauxhall offering prizes for the winners from each year group.

The year group winners were Molly McCran, Ethan Machent and Lottie Lord, who each took home a trophy. Ezra Pyne had a stand-out performance, astounding the audience by picking two pointless answers by knowing the capital cities of Fiji and Namibia, and becoming the school’s Geography Champion in the process.

The children’s performance impressed Will Gladwin, general manager of Bristol Street Motors Vauxhall Chesterfield, so much that the dealership has also donated an iPad to be shared by Key Stage 1 pupils.

The Chatsworth Road dealership, which has a long-standing relationship with the school, also sponsored a flag design competition for the younger pupils, paying for the winning design by Ava Simmons, Fan Ling Weng, and Victoria Cai, to be produced and now hangs proudly on the school gates.

Will Gladwin said: “Rewarding children for good work is an important part of their education, and by adding the occasional incentive you can make something like remembering capital cities a bit more exciting.

“We feel it’s important that businesses look to support the local community and I couldn’t think of a better way to do that than encouraging young children to get enthused about learning.”

Sharon Smith, teacher and geography coordinator at Brampton Primary School, said: “It’s great to have the backing of a local business like Bristol Street Motors. Its support has been fantastic and the prizes it donated really motivated the children.”