Meet the man at the top of Glasgow's new glass tower 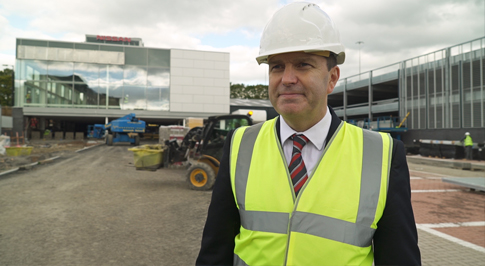 Meet the man at the top of Glasgow's new glass tower

Macklin Motors has appointed Robert Auld to oversee its unique £5million Nissan dealership, which opens in Glasgow at the beginning of November.

The new dealership on Port Dundas Road, which features an eight-story glass tower, has been under construction for the past 12 months and saw an investment from Macklin Motors’ parent company, Vertu Motors, of over £5million.

Robert Auld, who currently oversee  Macklin’s Nissan North dealership, will take the helm when the site is officially opened at the beginning of November.

He said: “The new dealership is a fantastic facility and I’m very excited to be moving in with my newly expanded team. Construction has been a year in the making and now that the final touches are being completed you can really get a sense of the scale of the project.

“The dealership’s glass tower is a first for the city and I know that it has got people talking with it being so close to the M8 motorway.”

Robert has spent more than half of his life in the motor retail industry. Initially getting his break as a Trainee Sales Executive, he progressed through the ranks to become Business Manager and Sales Manager, before taking a Franchise Manager Position for a Mercedes-Benz dealership, where he played a pivotal role in winning the German manufacturer’s 2013 Retailer of the Year award.

It was his time with the premium manufacturer that taught Robert the importance of customer service, a lesson he has taken with him since joining Macklin Motors in 2014.

He said: “This new dealership will be a one stop shop for our customers. Everything they could need is under one roof. We have two floors of vehicles and there will be a servicing and MOT area. There is even a café bar area for customers to enjoy whilst waiting for their vehicle.”

The dealership is set to open its doors at the start of November.